This page includes suggestions of fun, tried-and-true activities you may wish to add to your ELP. You can use one or all of these ideas, or draw on them for inspiration.

Skits – could be made-up for an evening performance at the colony. The students’ creative minds come alive while role playing — let creativity reign! This is often one of the most amusing parts of the ELP experience.

Russian Games – are lots of fun and valuable for burning off excess exuberance. Descriptions of several Russian and Native Californian games follow. 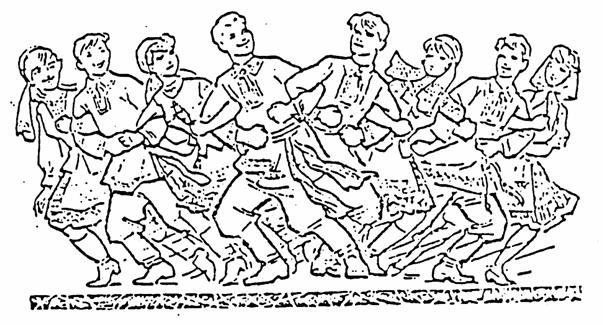 Native American Games – Kashia Pomo people, like most of us, liked games. They especially liked games that involved gambling. Two of the more popular games are explained below –

To Make Staves –Traditionally, staves were made of elderberry (the most common material for Sonoma County), maple or willow. Many of you should be able to find these trees growing in your county. (Easy non-traditional materials might be wooden dowels or even tongue depressors decorated on one side–but making traditional ones is really more fun.)

To make six staves, take three pieces of wood about one inch in diameter and six to nine inches long. Split the sticks lengthwise into even halves. Then smooth the edges using a rough rock. The curved side can be left with the bark on or peeled. If peeled, it should be colored in a traditional pattern. Traditionally, patterns were put on staves by making a design out of bark and fixing the bark against the rounded side of the sticks. The sticks were then held over the fire until blackened with soot. The bark was removed and the design pattern stayed. You could also burn or paint patterns on the staves.

To Play the Game of Staves – To play you will need twelve counting pieces (see hand and grass game above) as well as 6 staves. Put a mat or pelt in the middle of the circle of players. Place the counting sticks on the mat. The first player holds the staves in his hand and throws them on the mat. Scoring (Colony Ross style) –

When the pile of counters is all gone, the scoring player draws a counter from the next person to her right who has a counter. The game is played until one player has all of the counters. Side bets on the outcomes of throws or the game are encouraged.]

Historic Background on the Game of Staves – By David W. Peri

Of the many games played by California Indians, games of chance were among the most favorite. There were separate gambling games for men and women and games in which they participated together. Such games were not simply recreational, but had important roles in the overall culture. They were often the means by which disputes were settled, they functioned to relieve tension and anxiety between individuals and groups; they served to redistribute wealth and provided opportunities for persons to achieve status because of their skill, and they served as a means whereby individuals received recognition for their ability to restrain their personal desires, since success at gambling demanded the adherence to special rules in order to acquire and ensure a person’s luck.

Some groups came to be known for their gambling skills; for example, the Kashia or Southwestern Pomo were known by the Coast Central Pomo of Point Arena as the “Expert Gambling People.” The stave game, although a women’s game for most California Indians, was always played by both men and women among some groups, and today is played by many without regard to gender. In general, the game is played by two opposing players or sides and consists of tossing six wooden staves, accompanied by the singing of special gambling or “luck” songs to ensure a player’s or team’s success. And, depending upon how the staves land, points, twelve in all, are won or lost until one player or side has them all and wins the game, including the bets.

At least two players, one on each side, are required. For the most part, the two sides are even, although there are occasions when one side has more players. In such cases, the side with fewer players considers itself especially lucky and capable of “taking on everybody.

Various items were used as bets or wagers, which was especially the case from the 1800s to the early 1900s. A bet could be anything from clamshell beads to magnesite or “Indian gold”, hides, bows, baskets, belts of shell beads or feathers, blankets, guns, ironware, wagons, buggies, gold and silver coins, clothes, or almost anything else that the players could agree upon. Bets were made between the two sides and could be contributed to by onlookers and supporters of each side. Side bets between individual bystanders were also made. Players and bystanders could also wager on individual throws as well as on the outcome of the game. Attention was focused on each throw of the “sticks”, and points were won or lost depending upon how they fell.

Elsie Allen, Makahmo Pomo weaver, told of an event, which took place around 1915.

“When I was a little girl, maybe about ten, the Cloverdale people and the Dry Creek people got together for a doings. There was a hand game and a stick game going on. I don’t know just how many games they played, but it seemed like they played all the time; they went all night too. There was this woman married to a Dry Creek man who was playing too. They had lots of money because she came in a two-horse buggy, had an umbrella, lots of good blankets on the seat, and a suitcase (most had flour sacks for our clothes when we traveled), and she had on clothes like the white ladies would wear, and a purse that sounded like she had bells in it”.

“This lady, sometimes she would get almost all the sticks (counters), and then she would just about lose them all. Before the people had something to eat in the morning, she’d lost just about everything: her money, the horses, the buggy, her shoes, hat, underskirts, even her blouse. She said she wanted to play one more game and give her luck a chance to win. The other side wanted to know if she was going to bet her skirt since she didn’t have anything else. She said no; she wasn’t going to bet that. She said ‘How much will you give me for my husband; I’ll bet my husband. He’s worth something. How much will somebody give me?’ All the ladies and the young women laughed at this; they thought to themselves that he must not be very good if this lady wants to bet him. Everybody laughed about her bet; but, you know, they were probably right; he probably wasn’t much good.”

Staves are made from branches of willow, elderberry, maple, alder, and similar woods. According to Elsie, “the ladies had their own sets of sticks, though they were made by the men.” Along with the six staves, twelve counters are also used in the game. The counters, 8 to 12 inches long and 1/4 to 1/2 inches in diameter, are made from hazel, ash, and dogwood. For the most part, counters are undecorated except for removing the bark.

The game begins with an evenly divided number of players, and, if need be, a referee, who holds the twelve counters, plus the bets. Both sides agree to the rules of the game before the game begins. Often the agreement is “witnessed” by the referee, who also may assist the two sides in reaching an agreement. A smooth playing surface is required. The sides play to determine who begins the game, with the first throw going to the side scoring the first point. In general, the staves may be tossed any way so long as they are thrown all together. Points are determined by how the staves fall. If when they fall all the designed (rounded) or “black” sides turn up, or all the undecorated (flat) or “white” sides turn up, 2 points are scored; if 3 white and 3 black sides turn up, 1 point is scored; and if any other combination shows, no points are made. Often, one or more of the staves will land on its side and depending upon how it’s called either black or white, one or more points may be scored. It is in such plays that a referee comes in handy, for he will make the final decision and “take the heat.” Every time a player or side scores a point, it is given a counter by the referee and continues to play. A side may “keep the sticks,” that is, continue to throw as long as it continues to score points so as not to “break its luck.” After a throw, when no points are scored, the staves are given to the opposite side, and the next player, in turn, makes the throw. The referee gives out the first twelve counters. If the game is not won by this time, the referee remains in the game to make sure that the counters are given out correctly, one side to the other, after each successful throw, and to call or resolve any disputed throw. The sides continue to play against each other for the counters until one side has them all and wins the game, including the bets.